Today, I wanted to talk about the American health care System. This is a three-parter and this first part will be used to discuss the nuts and bolts of the Patient Care and Affordable Care Act (called the Affordable Care Act or ACA for short) as well as recent legislation. But before I can get into all that, I would like to talk about the standing of the U.S. health system compared to the rest of the world.

Our government spends more per capita than most other countries ($10,345) and is the only advanced economy to not have a universal health care system. In particular, it is particularly costly to give birth. Despite these costs, we do not have the best of incomes.

In March, Quartz published the results from a study it conducted to compare the American standard of living to other countries which were part of a 2016 report by the Organization of Economic Cooperation and Development. Quartz based its report on the 17 goals defined by the United Nations in 2015, but only looked more closely at 11 of those goals, which included health. The study found that Americans had higher infant mortality rates and a lower life expectancy.

Americans have the lowest life expectancy among the OCED countries. On average, life expectancies fell from 78.9 years to 78.8 years from 2014-2015.

While a direct connection between mortality rates and a lack of health care may not be immediately found, there is a mortality gap between the rich and poor. Some of that has to be because the lack of funds to pay for life-saving procedures.

With that said, let’s talk about the ACA and the monstrosities that were being pushed through Congress.

What Is the ACA and What Does it Do?

The Affordable Care Act, passed in 2010, required most health insurers to give recipients essential health care services. These services included emergency, prenatal, laboratory, mental health, substance abuse, and rehabilitative services. Hospitalization was required, as were ambulatory patient services. Depending on the plan and the state, other services, like dental, vision, and health management services were also required. And depending on the plan and the level of need, some patients received discounted or free prescription medication.

Health care coverage was guaranteed for recipients the moment they signed up for health plans and paid their premiums. Most importantly, HMO’s were barred from refusing to provide coverage to people based on pre-existing conditions. The law also barred health care providers from putting lifetime limits on essential health services.

In addition, grandfathered plans were allowed.

A grandfathered health plan is a group plan that was purchased on or before March 23, 2010 and is exempted from many of the changed required by the Affordable Care Act. However, the plan would lose its grandfathered status if it made “certain changes that reduce benefits or increase costs to consumers. Other people, whether they were newer employers or family members, were allowed to be added to these plans after March 23, 2010.

It made subsidies available for people who made less than $48,000 a year and used health care exchanges. The subsidies would automatically be applied to the insured’s health care bills each month and the amount of subsidies a person could receive was income-based and depended on the costs of premiums in a particular area.

How the ACA Was Paid For

The cost of providing insurance for poor Americans would be shared by the federal and state governments and the money the federal government gave to each state depended on how much care their Medicaid patients received.

Additionally, there was a mandate which required everyone to have health insurance. The mandate was put in place in order to get healthier Americans to pay for their plans and thus keep prices low for older and sicker Americans. And the failure to purchase health insurance by a certain date each year (Jan. 31) would result in a tax penalty.

What Changes Do Paul Ryan and Others Want to Make to the Law?

So far, there were three rounds of Republicans trying to repeal the ACA under Trump.

On Monday, Mar. 6, Republicans unveiled their replacement plan for the Affordable Care Act. It will be revised in committee, but here are the initial features:

Two popular aspects of the ACA would stand: One is the requirement that insurance companies accept customers with pre-existing conditions. The other requirement allows children up to 26 years old to stay on their parents’ medical plans.

But Not So Fast …

After the Congressional Budget Office shared its assessment of the first version of Paul Ryan’s American Health Care Act, Republicans awaited an analysis from the White House’s Office of Management and Budget. According to the OMB’s preliminary analysis of the AHCA, an estimated 26 million Americans could lose their health coverage over 10 years if the bill was passed. That was far more than the CBO estimate of 24 million Americans losing coverage.

However, the effects could be far worse. A deeper analysis of the bill revealed that a total of 54 Americans could be uninsured by 2026. That includes 17 million for Medicaid. Another 6 million could be cut out of the individual market and another 3 million might be cut out of employer-based plans. Under the ACA, around 28 million Americans were projected to remain uninsured in that time period.

Additionally, the bill died in the House after the Freedom Caucus let it be known that they would not vote for the bill. Also, the caucus didn’t feel that the cuts being made by the bill went far enough.

This time, the American Health Care Act passed the House, albeit by a narrow 217-213 vote. As I said above, the legislation had to be shelved in March because members of the freedom caucus and some moderates would not vote for it. The first group was convinced to vote for the newer legislation after it contained a provision to allow states to opt out of the ACA rule about pre-existing conditions. The moderates were pulled in by a provision to give $8 billion more dollars to help cover people with pre-existing conditions.

Of course, no Democrats voted for the legislation. Twenty Republicans voted against it, and most of them were vulnerable “centrists” and those who came from states that had accepted the Medicare expansion.

And after that, Republican lawmakers did a victory lap and boozed it up.

From the very beginning, the Senate bill was doomed. There were a few Republican defectors, including Susan Collins (Maine) and Dean Heller. This forced Senate Majority Leader Mitch McConnell to shelve the bill and try to push it through before the August recess.

When the Senate took another stab at it, eventually, there were three bills to consider. One was an old bill passed (and promptly vetoed) during Obama’s presidency. The other two were rushed and written behind closed doors.

What This House Bill Would Do

This version of the American Health Care Act repeals core elements of the ACA, including:

The bill would have done the following, if passed:

It turns out that members of Congress and their staffs had to also buy insurance from the same marketplace as other Americans. However, The American Health Care Act appeared to have included a provision that excluded members of Congress and their staffs from losing the best parts of the ACA. Some Republicans, like Rep. Tom MacArthur (R-NJ), said legislation would be introduced to close that loophole.

What the Senate Bills Would Do

Near the end of July, the Senate was looking at three bills:

The first bill, which was passed in 2015 but vetoed, just undid many of the ACA components without offering any type of replacement. The CBO estimated that up to 32 million more Americans would be uninsured by 2026.

The second bill was the Senate’s version of the AHCA. It did much of what the House bill did, but it called for the phasing out the payments to Medicaid beginning in 2021-2023, with a 25% reduction in Medicaid by 2016. Tax cuts would total about $583 billion over 10 years and states would be allowed to opt out of requiring essential health benefits.

The “skinny” repeal would do away with the individual mandate.

How Bad These Bills Were

Worse still, both the Senate and House Bills weren’t even read by most of the lawmakers who voted in favor of them. Both the second House bill and the “Skinny” repeal were rushed before they could receive a CBO score. When confronted by the gory details from the post-vote CBO score, Rep. Mark Meadows (R-NC), the leader of the Freedom Caucus, broke into tears. 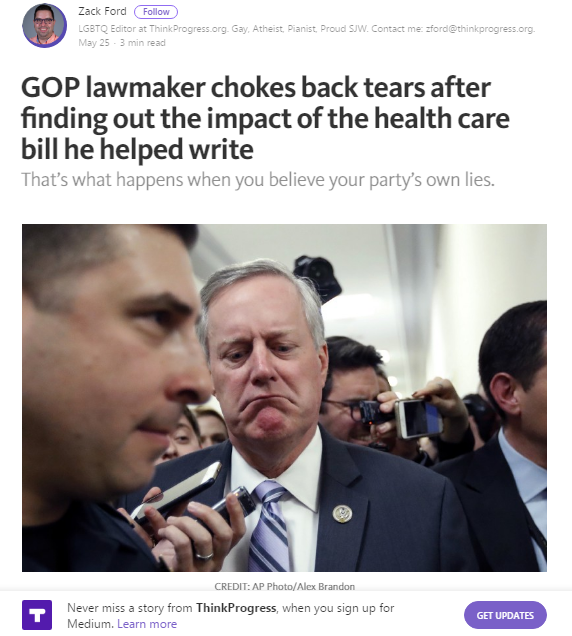 I talked about this before, but there was a certain amount of anger at John McCain because he came from surgery to remove a brain tumor just to allow these bills to move forward for a vote. However, he stayed true to his word of not voting for any of the bills in their forms.

Regardless of how one feels about McCain, the week was filled with plenty of emotion. Some people went from respecting him to hating him. Some others went back to respecting him for killing those bills.

But it wasn’t over.

This Third Monstrosity, A.K.A. the Zombie

After the dramatic Senate vote, Sens. Bill Cassidy (R-LA) and Lindsey Graham (R-SC) began working on a bill with their names on it. In September, they tried to push this bill with a deadline of September 30, the end of the fiscal year. However, they had to convince enough Republicans plus Trump to back it and McConnell did not want to deal with another embarrassment.

What would the bill do?

According to Dylan Scott, the Graham-Cassidy Act “would take Obamacare’s funding and turn it into a block grant, while also overhauling Medicaid and rolling back some of the law’s protections for people with preexisting conditions.”

There was essentially nothing new in this bill.

Nevertheless, this bill, too, was killed after John McCain made it clear on September 22 that he would not vote for the legislation.

I will talk a little bit more about Lindsey Graham and Bill Cassidy while pivoting to the Democratic efforts in the way of health care.

a place to smile