Today, I also read the republished New York Times obituary for Frederick Douglass. While it didn’t make mention of his birthday, the article was posted in recognition of it and it discussed Douglass’ role as a suffragist ally.

So, what do I have to offer on Frederick Douglass Day? Well, I wanted to discuss his life and how this celebration came to be. Let’s do this trivia style.

END_OF_DOCUMENT_TOKEN_TO_BE_REPLACED

It’s almost 2019 where I am, and we’re already gearing up for the 2020 presidential elections. But before we even talk about those elections in depth, we must first look back to the 2018 midterms and process what just happened.

This post is late, although I gave myself a month to finish the last one. (It was tedious work, with the coding and amount of research for races that aren’t entirely settled.) Anyway, I wanted to get this done before New Year’s Day, so this will be my last post of 2018.

That said, what do I think about what transpired? Let’s first do a recap of the 2018 midterm primaries.

Note: This post will, of course, have a left-leaning focus for much of it.

END_OF_DOCUMENT_TOKEN_TO_BE_REPLACED

Today is Election Day (and yes, I voted), so I started this post to keep track of the most important results. For now, I will keep track of the gubernatorial and congressional races. Eventually, I will use this post look at the balance of power across the country and in each state after the elections are done. That includes some notes about state legislatures.

The following slate of candidates will be listed according to their state and the seats they are competing for. I will include all the candidates who won their respective partisan primaries and those who were nominated at state party conventions, written in, or otherwise met other criteria to qualify for their general election races. Once all votes are tabulated, I will indicate the winners.

A few states, like Georgia, may also hold runoffs. So, I will likely have to update this post to include any extra information related to runoffs.

Additionally, I will use specific characters and formatting to indicate how the races were developed. Here’s the key:

END_OF_DOCUMENT_TOKEN_TO_BE_REPLACED

Two posts ago in this series, I talked about the chances of a blue wave occurring in the 2018 midterms. While one is certainly possible in the House of Representatives (and in governor’s races and in state legislatures), this is likely a bad year for Democrats in the Senate. Also, there are two things that would preclude a blue wave from happening at any level: the missteps of the Democratic Party’s leadership and Republican cheating.

In the previous post in this series, I went into detail about how the Democratic leadership harmed its own chances to at least take over one house of Congress. In this post, I will discuss how Republican cheating will hurt Democrats and voters.

One bit of good news we have moving forward is the demise of Trump’s voter suppression panel. In January 2018, President Donald Trump announced that he was dissolving the Presidential Advisory Commission on Election Integrity, the advisory council he founded based on the claim that immigrants illegally voted in 2016. The commission was headed by Kris Kobach and nominally chaired by Vice President Mike Pence, but it only met twice, in July and September 2017.

The bad news is that there are so many cases of voter suppression in states controlled, at least in part, by Republicans. At least two of those states have elections officials running for governor.

Before I go into detail about those cases, I would like to talk about the hurdles awaiting Democratic candidates. Some are familiar, but some efforts to suppress the vote are relatively new and were enabled by the Supreme Court’s 2013 decision.

END_OF_DOCUMENT_TOKEN_TO_BE_REPLACED

What could threaten a blue wave in 2018? Quite frankly, the Democratic establishment could. Other top Democratic leaders can, as well.

These midterms should be a referendum on Donald Trump and the Republican agenda, but for both to be successfully rebuked, the opposition needs to be united and to have a cohesive message. Unfortunately, far too many Democratic leaders have gotten in the way of the messages presented by progressives while presenting none of their own. On top of that, these so-called leaders have failed to capitalize on the Republicans’ forced errors and have committed a series of their own missteps.

All these things have threatened to depress the vote and to undermine the energy on the left and make the notion of a blue wave seem like a distant dream. In this post (another LAP — sorry), I will explain why I’ve come to that conclusion.

END_OF_DOCUMENT_TOKEN_TO_BE_REPLACED 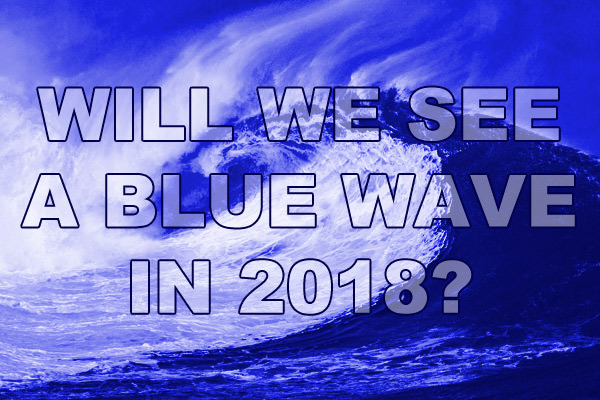 The prospect of a blue wave has been the focus of much of the discussion surrounding the 2018 midterms. It’s a possibility because there have been encouraging signs for Democrats since the latter half of 2017.

The Democratic Party has a steep hill to climb in these midterms, but as I’ve said before, the party received a boost near the end of 2017 in the form of Republican retirements and victories across state houses in December of that year. That said, anything can happen between now and November 6.

This election could be closer than expected, but Democrats lead the Republicans in terms of enthusiasm among likely voters. Also, the expected turnout may, in fact, be much higher than any midterm election in history.

Now, early voting has already begun across 30 states and there are a few things we must note about that and the leadup to Election Day. There are some disadvantages Democrats will have to contend with, even after the last ballot is cast. We also need to consider the fundraising advantage Republicans might have heading into this month. Additionally, we must think about how many seats Democrats need to win to even say that a blue wave was achieved.

END_OF_DOCUMENT_TOKEN_TO_BE_REPLACED

The month of October is almost over, so I wanted to put up this thread about extra midterm news. I don’t know if there will be an October Surprise (as there are only 6 days left this month), but there is a big story developing at the moment I’m typing this.

As many people know, at least 10 suspicious packages were found in a few states and the District of Columbia. We do not know of the exact motive behind the deliveries, but if the identity of the sender is revealed before the November 6 elections, that could have a tremendous effect for the people voting on Election Day.

Beyond that, many other important things have been developing in these last weeks of the 2018 midterms. Of course, this post will be periodically updated to include more news and anything that I missed.

END_OF_DOCUMENT_TOKEN_TO_BE_REPLACED

What happened during the primaries? This is where I will look back at the 2018 midterm primaries and various events surrounding them.

I would like to address my views about what transpired during the primary season in another post. For now, let’s just look at what has happened to the political landscape and how the Democrats are doing so far in the age of Trump.

Note: I will be discussing the results of partisan primaries in 49 states (Louisiana does not have a regular primary), but the results listed here will not account for all of the candidates in each race. Depending on the state, some political parties (like the Green and Libertarian Parties) do not hold partisan primaries in each race; they may decide on nominees for certain races at their state conventions or candidates will have to be written in. Also, races featuring Democrats and Republicans might not have required primaries if the parties only had one candidate in contention. I will list all candidates in certain races in another post.

Now, let’s get to the timeline.

END_OF_DOCUMENT_TOKEN_TO_BE_REPLACED

Before the midterms began, the Republican party was still grappling with retirements in Congress and Sen Al Franken, a Democrat, said goodbye to his colleagues. How much happened January and February 2018? The first two months of the year were busier than you might think, primary-wise.

END_OF_DOCUMENT_TOKEN_TO_BE_REPLACED

How do you feel about George W. Bush? I never liked him, even if he seemed approachable. I just never agreed with his policies, nor did I appreciate how he got into the White House.

Many Americans are “reevaluating” his eight years in the White House, especially in the face of a Donald Trump presidency. Their opinions of him might also have conditioned by the ongoing campaign Bush has been waging to present himself in a better light, aided by the press. However, letting Bush off the hook is a huge mistake.

George W. Bush has been feeling himself ever since Donald Trump ran for president in 2016, and the latter has the numbers to boost his ego. George W. Bush left the White House with an overall approval rating of 34%, but he became just as popular as Bill Clinton just 7 years later. Of course, that jump was attributed in part to Trump.

Bush has received more since he actively distanced himself from Trump. Last year, the former made a veiled comment about the latter (then denied that he was talking about the guy). At one point, Bush also said that Trump made him look good by comparison.

The truth is Bush was worse than Trump is currently — although Trump is very, very bad right now. But when you take both of their legacies at length and look at all the things both these guys have done, Bush did a lot more damage. That’s because Bush had eight years to do damage.

Of course, there is a lot of time for Trump to catch up — and Trump will likely do more damage in just four years. In the meantime, we need to remember why Bush became such a hated figure around the world from 2001 to 2009.