That man is as stubborn as a mule. 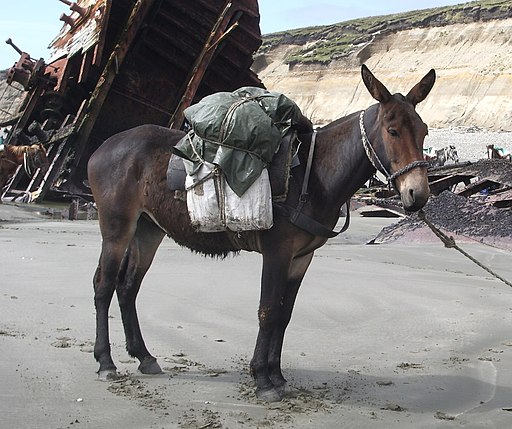 Sorry for being a day late, but I’ve been pretty slow lately. I have another post due today, but that should be much easier to do since I’m re-purposing old information.

I planned on during this post weeks ago but I decided to space it out since I settled on doing a somewhat related topic, “Strong as an Ox,” a few weeks ago. Like that other saying, this saying was difficult to research — in terms of finding the origin — but the research for this topic was somewhat more enjoyable.

When Did This Saying Originate? And What Does ‘Stubborn As a Mule’ Mean?

Among the sources, I came across two that indicated an origin, but no other sources were able to back up their claims.

One of the first sources I consulted was quoted from The American Heritage® Dictionary of Idioms by Christine Ammer. Here is the entry I found on Dictionary.com:

stubborn as a mule

Extremely obstinate, as in He’s stubborn as a mule about wearing a suit and tie. This simile evokes the proverbial stubbornness of mules, whose use as draft animals was once so common that the reputation for obstinacy can hardly be as warranted as the term indicates. [Early 1800s]

This is the only source that listed an exact year, but I wanted to make sure that could be corroborated. I had no such luck.

From this book, I will quote the following passage from “Chapter 1: American Spoken Here—English Understood” under the section “Localisms as Enrichment” on page 9:

The South contributed mightily to the American language … Colorful expressions such as “colder than a well-digger’s ass in January” and “stubborn as a mule” also come from the Southern regions.

The next passage comes from “Chapter 5: Similes and Metaphors Indicating Extremes,” found in the third paragraph on page 97:

Though literal translations of similes are very common, some can be tricky … Other translation difficulties are cultural. Stubborn as a mule, for example, is easy to understand if you come from a country where mules exist in large numbers or are part of the country’s history. For countries where mules are rare, stubborn as an ox (or some other animal) may be substituted.

Here is the definition of the phrase, on page 103:

Stubborn (Obstinate) as a mule.

Here is a definition of mule (as a slang term) from “Chapter 7: American Slang and Colloquialisms,” on page 116:

Are Mules (and Donkeys) Stubborn?

While doing the research for this post, I learned quite a bit about the mule as well as the parents of the mule: the horse and the donkey. That led me to search if mules and donkeys, two animals often accused of being quite stubborn animals.

Well, are mules and donkeys stubborn animals? Before answering the question, I would like to discuss Americans’ history with the mule. But I will hint that George Orwell was onto something when he wrote Animal Farm.

The Importance of the Mule

This article talks about the history of mules, starting from the 1500’s, when Spaniards brought over the first horses and donkeys to what is known as the United States. Sometime after the introduction to these animals, donkeys and horses — specifically male donkeys (jacks) and female horses (mares) — were bred together by the Spanish in order to produce mules.

During the 1820’s mules were in high demand in Missouri. In 1821, trade opened between New Mexico and Missouri. Soon afterward, mules began to replace horses as the draft animal of choice for pulling wagons.

During the 1830s, more Oxen were being used after being “introduced to the Santa Fe Trail in 1829.” However, mules would be used simultaneously since both animals had unique sets of advantages. This would continue for close to a century, until they were largely replaced by the automobile.

Near the turn of the 20th century, the mule was in great demand for the United States Army. The Army began heavily using mules as the military became involved in the Indian wars and during the Spanish-American War (which began in 1898). Mules would also be used heavily during World War II.

During the early part of the 20th century, mules were still used to plow hilly Missouri farm fields and there were used by the U.S. However, automobiles soon replaced mules for most of their utility.

Today, mules are still produced and in use. The Amish use mules for farm work and mules are useful for travelers in mountainous regions (Gardner). Today, the U.S. Army uses mules for carrying loads in Afghanistan (Hiskey).

The Intelligence of the Donkey

In a short article from 2013, Fred Attewill mentioned that the donkey has been seen as stubborn for at least several millennia. For example, Homer and Aesop referred to the donkey as “stupid, servile, and stubborn.” But were they right? In a word: no.

Donkeys (and mules) are sociable animals. Donkeys are best when in packs and they have a great affinity with human beings (“Donkey & Mule Facts”). They could also be trained to protect livestock, although they may be more aggressive than mules while doing so (Hiskey).

The Intelligence of the Mule

Are mules stubborn? Nope, and they may be smarter than donkeys.

A few years ago, Dr. Britta Osthaus, a senior lecturer in Applied Social Sciences at Canterbury University, Kent, conducted an experiment with dogs, donkeys, horses, and mules. Each animal was tested to see how they would complete a problem-solving task. The experiment was set up by placing a fence inside a pen.

Donkeys also outshone both dogs and horses in their flexibility, completely the opposite to what we expect from stubborn donkeys.

The biggest surprise was how well the mules performed. The mules consistently found the gaps and walked around them to get to their food.

Additionally, mules and donkeys have a tremendous sense of self-preservation. Neither will be willing to overwork themselves where horses might. Mules might be able to work through some situations if they trust their masters past what donkeys will do, but mules will not obey their masters if they feel a situation is too dangerous (Hiskey).

Knowing This, Is It Fair to Say Someone Is ‘As Stubborn As a Mule?’

What do you think?

I say no, unless you mean it as a compliment. Mules and donkeys are smart, sociable, and have a keen sense of self-preservation. While they can also work hard, they’re efficient workers and put their hooves down when they need to. A person with similar traits is pretty respectable.

Here are a few extra facts:

When stallions and jennys are bred, they can produce mules, too. However, those are called hinnies. A hinny is harder to produce since it is harder to breed a jenny with a stallion and the offspring might be too large for the jenny to foal (Hodges).

During the 1820’s, traders would normally bring back mules, jacks, and jennys from their travels to New Mexico. By 1922, Missouri had about 440,000 mules. Also, Kansas City and St. Louis were the two leading cities for mule auctions (Gardner).

At the height of the mule industry, there were as many as 6 million mules in the United States (Hodges).

In 1995, then-Missouri Governor Mel Carnahan signed a bill to recognize the mule as the official state animal (Gardner). Missouri had once been known as the “mule state” but is now known as the “Show Me State.” The commemoration of the mule served as a nod to the state’s once-booming mule industry.