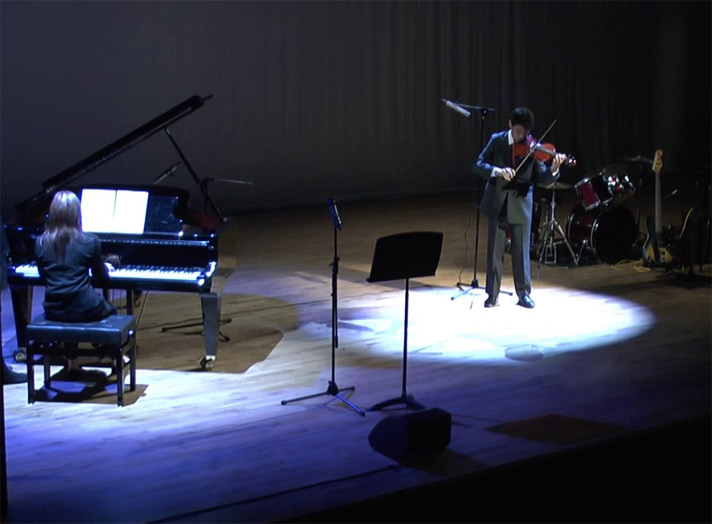 Here is the rest of my short story. Click here to read the first part.

Three songs in, Charles excused himself to go to the restroom. His mother addressed him with a raised eyebrow.

“Are you sure? It’s the middle of the show.”

“Alright, but hurry back.”

As Charles was washing his hands, he could not help be mutter some words of resentment. “He probably thinks he’s better than me with tat hoity-toity music.”

Charles is a normal big brother. When he and Tommy weren’t arguing or fighting, they were playing, competing, and scheming together.

Charles and Tommy are a year apart. They were (and this are) very close. But things changed over a year ago, when Tommy decided to take music lessons offered through the school.

When Tommy started taking his cello lessons that meant he would know something his big brother hadn’t taught him. Tommy could do something Charles could not. And there would be less time for the brothers to spend together.

As Charles was drying off his hands, he was met by one of his classmates. Jack Terry, David’s older brother, had a mischievous look on his face.

Charles nodded his head. “You’re telling me. I couldn’t stand another minute of it.”

Charles raised his left eyebrow. “I don’t like it when you have ideas …”

“Well, don’t you want to get out of hearing this drab music?”

Jack stepped out into the hallway. He took a left toward the glass doors that served as an entrance to the auditorium. Charles closely followed him.

“Hey, the auditorium’s that way.” Charles gestured to his right with his right thumb.

To the immediate left of the doors, there was a fire alarm. Jack outstretched his right hand as if to pull it.

Charles grabbed his friend’s wrist. “What are you doing?”

Kim Donaldson was getting worried. “What’s taking your son so long? I hope he isn’t getting into trouble.”

Charles Sr. started to rise from his seat. “I’ll go check on him.” He walked off to his right into the hallway that led to the restrooms.

Shortly after the Charles Sr. left the auditorium, the fire alarm sounded.

Jeremy was in the midst of a flute solo when the music came to a standstill.

“Please stay calm, everyone. Let’s all line up and exit the auditorium in an orderly fashion.

The principal began directing traffic, while making way for the performers to exit the stage.

There were a few exits. To either side of the stage, there were hallways that snaked around to exit doors. There was also an exit in the back of the auditorium.

Teachers helped parents and other invited guests to each one, depending on proximity.

Kim joined up with Tommy and led her children toward the path Charles Sr. went. They and the group they were in safely exited the building.

Everyone congregated in front of the school. The crowd stood on a well-manicured lawn that was bordered by the school and auditorium to the West and south and by the parking lot and street to the North and East.

Kim called out to her oldest son. “Charles, are you alright?”

Charles Sr. whispered a few words to his wife then found the school principal. After he had a few words with Mrs. Lawrence, she quickly made a call on her cell phone.

Kim looked at her son. She noticed him looking down at his feet.

“Boy, why did you pull that alarm?”

“Well, then, who did? Don’t lie to me, Charles. You have been difficult all evening and ever since your brother decided to take up the cello.”

“I can’t help but think that you’re jealous of your brother. Why can’t you be more supportive of him?”

Charles looked down at his own feet once again. His mother was right about one thing: her oldest son was jealous.

But could Charles bring himself to ruin a big night for his own brother?

Mrs. Lawrence addressed the crowd. “Everyone, it appears there was a false alarm. The fire department will be here shortly in order to sort everything out.”

A half-hour later, a fire truck pulled up in the parking lot.

Mrs. Lawrence approached the fire fighters, and a few of them went into the building. Shortly afterward, the blare of the fire alarm was no more.

The chief addressed the crowd. “Everything’s fine. You are free to go back inside.”

However, the chief left with a warning. “Luckily, this was a false alarm and we had no other emergencies tonight. Remember: fire alarms are not toys and if you create a false alarm, you could keep us away from someone who really needs our help. Enjoy the rest of your evening and I hope you have a safe Thanksgiving.”

The chief tipped his hat to Kim and gave a stern look to Charles and Jack.

Jack tugged at his collar.

Charles Sr. stood by his wife.

Kim whispered in his ear. “Did our boy pull that alarm?”

Charles Sr. shook his head. “It looks like Jack did. When I asked the boys, Jack begged me not to tell his parents, but I told him I had to.”

Kim left out a breath of relief. She then walked over to her son and put her hand on his shoulder.

“Hey. I’m sorry I was so harsh with you before, but you’ve been acting up lately.”

“Why don’t you talk to your brother.”

Tommy was speaking with some of the other performers when his older brother approached him.

Tommy paused before saying, “Thanks.”

Charles put his hand on his brother’s shoulder. “I’m proud of you, man.”

Tommy’s face lit up. He was grinning from ear to ear. “Really.”

Before either brother could say another word, Mrs. Lawrence came over and started ushering the performers back into the building.

Ten minutes later, the performers were regaining focus. Jeremy was asked to perform his flute solo from the beginning.

After that performance, it was time for Tommy to do a special performance of his own.

Miss Kwan first gave her announcement. “Next up, Tommy will play Canon in D by Parchelbel.”

Kim sat up straight in her seat.

Tommy started the first few notes with his bow, accompanied by Bethany’s pizzicato. 1 They were then joined by Jerry, And Sherri’s violins.

Charles laughed. “Is this graduation music?”

After the song was finished, there was still one more to be done.

Miss Kwan addressed the audience once more. “For our final performance, we will play a song that might be familiar to you. Here is our rendition of the fairy fountain from The Legend of Zelda, inspired by Kondo Koji.2

For this performance, all the students had to play a part. But there was one addition. Grace first played a solo. Then she was followed by Grace’s harp solo.

Grace continued with the harp to lay out the basic melody of the fairy fountain theme. Then she was joined by the violins, cellos, and flute.

After the performance, the performers were met with a standing ovation that lasted for 2 good minutes.

Miss Kwan and her students took a bow.

For just one moment, Charles forgot about his jealousy and smiled. He was happy for his brother and amazed.

Tommy went back stage and packed his cello away. As he made his way to his family, he was greeted by his fifth-grade teacher, Mrs. McElroy.

“That was a brilliant performance, Tommy,” she said with a thick Irish accent.

Charles snuck up to his brother. “Um … how would you feel if I said … I wanted to learn an instrument?”

Tommy raised his left eyebrow. “Are you sure you can handle it?”

Charles gave his brother a playful jab in the shoulder.

The boys joined up with their family.

Kim gave Tommy a kiss on the cheek. “I’m so proud of my baby!”

Charles Sr. spoke up. “Come on, Kim. Stop embarrassing the boy.” To Tommy “That’s my boy!”

Charles Sr. scooped up his daughter. “Oop, there you go.”

The boys’ faces lit up.

Charles Sr. pleaded with his wife. “Come on, Kim …”

The boys jumped for joy.

As the Donaldsons made their way outside, they saw Jack’s parents yelling at him.

Charles said, “You don’t want to know. Just be glad Mom isn’t yelling at us.”

1. The term pizzicato is used to describe the act of plucking the strings of violin or cello, as opposed to striking those strings with a bow.

2. Koji Kondo (or 近藤 浩治 Kondō Kōji in Japanese) is a video game composer who was behind the 25th anniversary soundtrack for the Legend of Zelda (Nintendo) game series.